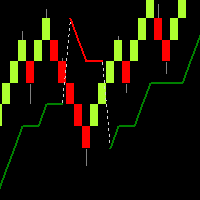 Display Renko bricks in an indicator window without the need for an offline chart.

Renko OnChart and Renko OnChart SR will display a Renko chart in a separate indicator window allowing you to see both Renko bricks and time based candles at the same time. There is no need to run another process to build offline data or to open an offline chart. You can load Renko OnChart on any symbol with any timeframe.

Renko charts are based only on price movement, not time. They can be very useful for removing the noise from charts to see only price direction.

Each new bar or brick is only displayed after a price movement of the specified size. Bricks never show side by side, if price reverses the next brick will show above (bullish reversal) or below (bearish reversal) the previous brick.

The shadows shown on some bricks indicate where price has moved outside the range of a brick but not far enough to print a new brick. Apart from the most recent brick, where the next is yet to form, there should only be shadows opposite to the direction of the next brick.

When the Renko chart is first drawn, after chart opening or when changing symbol or timeframe, the Renko bricks must be interpolated from the time based information available. The time based information has only open, high, low and close but there is no indication of when the high and low are reached or if there may be multiple price retracements during the candle. Renko OnChart will make a best approximation of Renko movement based on the information available. This interpolation may take some seconds to complete, as it also looks to smaller timeframes for better interpolation the time taken to first display may be a little longer if history data must be downloaded from the server.